A big thank you to Sara Letourneau, who started this off on her blog. It seemed like an intriguing post idea, except that I realised that my firsts and hers had an 80% correlation. So, this post won’t be about my actual first love (fantasy). I chose to go with the crime/mystery genre. Here are my first five and one takeaway from each that has made an impact on my writing.

She’s actually my first everything. My first foray into her mysteries started with The Five Find-Outers and Dog series. 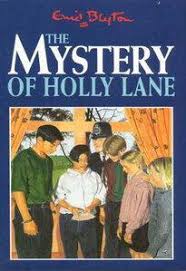 I think I managed to finish them all before I outgrew them. I have also read quite a few Famous Five books (I got all of them except #18 recently and plan to finish them next year). Curiously, I never touched the Secret Seven. I started writing because I loved her vivid imagination so much. Also, I wrote a lot like her. (Something about imitation being the best form of flattery?) Back then, it was the only way I knew. But I owe her immensely, for writing is something that still gives me limitless joy even today. The major takeaway from her writing would be to give characters distinct voices or catchphrases. (Remember old “Clear orf”?) It’s very realistic as no two real people have the same mannerisms in speech and it also makes the characters memorable for the readers.

This is the popular pseudonym of the writers who wrote the Nancy Drew series. As a teenager, Blyton’s stories began to feel inadequate and I turned to this beautiful and capable sleuth for my quota of mystery. Some of them proved to be excellent, but after a while they got too formulaic, so much so that even a novice reader like me stopped borrowing books from this series. I had to think hard about the takeaway from this one because I’ve forgotten most of the stories (and I honestly remember only two character names – Nancy and Ned). Since I have to pick something, it is that female protagonists can be smart and pretty (if written well), and work like a charm on the targeted audience. I mean, I was mostly exposed to mainstream media in which most of the gorgeous girls were shallow and the intellectual ones always hid behind thick spectacles. This was a very skewed representation, of course, and I’m glad the books gave me a sort of “best of both worlds” view so I didn’t reflect those attitudes. This helped me a lot with the kind of female characters I use in my stories.

I can’t begin to describe how absolutely in love I am with the character of Sherlock Holmes. Not in the romantic vein (which would totally be one-way and therefore a huge waste of time), but just the idea of such a wonderfully flawed yet brilliant man made me tear through all of the published stories in record time. The Hound of the Baskervilles is my eternal favourite. There are numerous adaptations and I have kept up with all of them because I’m a hopeless fangirl. I like that most of the stories are told in the viewpoint of John Watson, easily the best literary friend anyone can ever have, because I don’t think a lot of people could have related to the eccentric personality of Holmes. This is also the biggest takeaway, incidentally. Viewpoint matters a lot when trying to spin a mysterious yarn and by choosing Watson over Holmes, Conan Doyle keeps his readers guessing at every stage, which would not have been possible from the protagonist’s POV. I’m going to cheat and add a second one – giving your characters flaws. Holmes is pure genius, but he couldn’t have made it very far with his terrible people skills, which is goes to show that compelling and believable characters must always have shortcomings (the BBC adaptation does a great job of highlighting this).

Of course everyone who reads probably already guessed this entry. It’s a logical step to move from one brilliant detective to the next – Hercule Poirot. Although I found some of the Miss Marple ones a bit dull, I greatly admire her works as a whole. Cards on the Table and The ABC Murders are a few of the stories I thoroughly enjoyed. I learnt from Christie’s versatility more than her writing per se. She had two distinct investigators, her plots were expertly woven and her name became synonymous with great mysteries. One day I want to grow up and be her (or, you know, just grow up). If I had to pick out a lesson from all the rambling, I’d say, pay attention to plot, especially when writing in this genre. 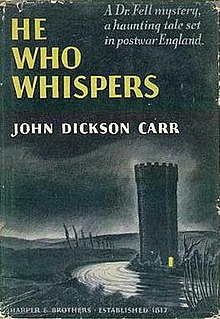 I’m actually unsure if he should be in the top five, but I can’t seem to think of anyone else. I started devouring fantasy after the Agatha Christie phase and mystery took a backseat. One day, I was browsing for good locked-room mysteries (you’re lying if you don’t find them appealing) and came across a glowing recommendation for He Who Whispers. It was just as good as the reviewer had said. That is unfortunately the only book I’ve read of this author. The takeaway would be to carefully consider the setting and examine its influences on the characters and the plot. Since this is a well-known piece of writing advice, I shall not delve further into it.

That was great fun to reminisce and write. Some of the lessons just came spontaneously to me – I had no idea my subconscious mind was that capable! Why don’t you give this a try? Have you read these books as well? What do you think? Let me know via the comments section below.

12 thoughts on “Who Were the First Five Authors You Read in Your Favourite Genre?”